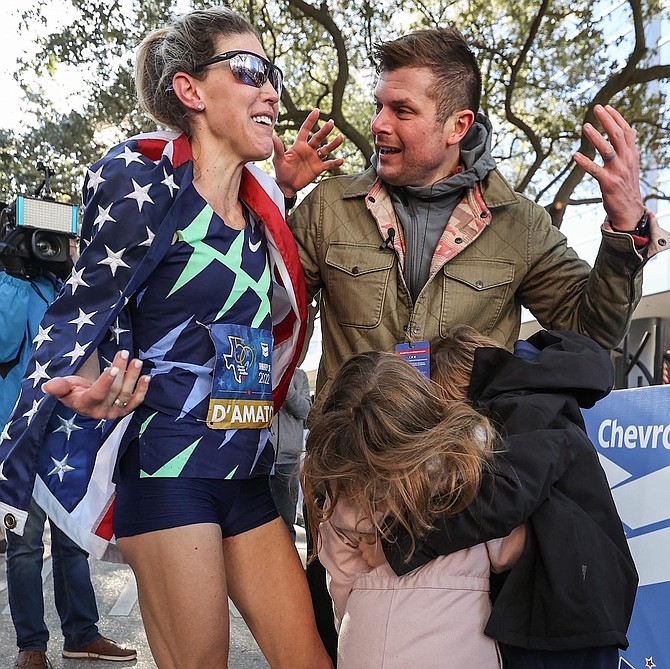 Keira (Carlstrom) D'Amato’s strong support team, her family, husband Anthony, and their children, Tommy, 7, and Quinn, 5, surround her with love.

It took Keira (Carlstrom) D'Amato, a 37-year-old Oakton High School alumna, mother of two, and career woman. eight years to rediscover her love of running and put on her sneakers again. After she did, D'Amato shattered the U.S. women's marathon record on Jan. 16 with a time of 2:19:12  at the 2022 Chevron Houston Marathon, running an average pace of 05:19 minutes a mile. The record stood since 2006 when American Deena Kastor won the London Marathon in 2:19:36. 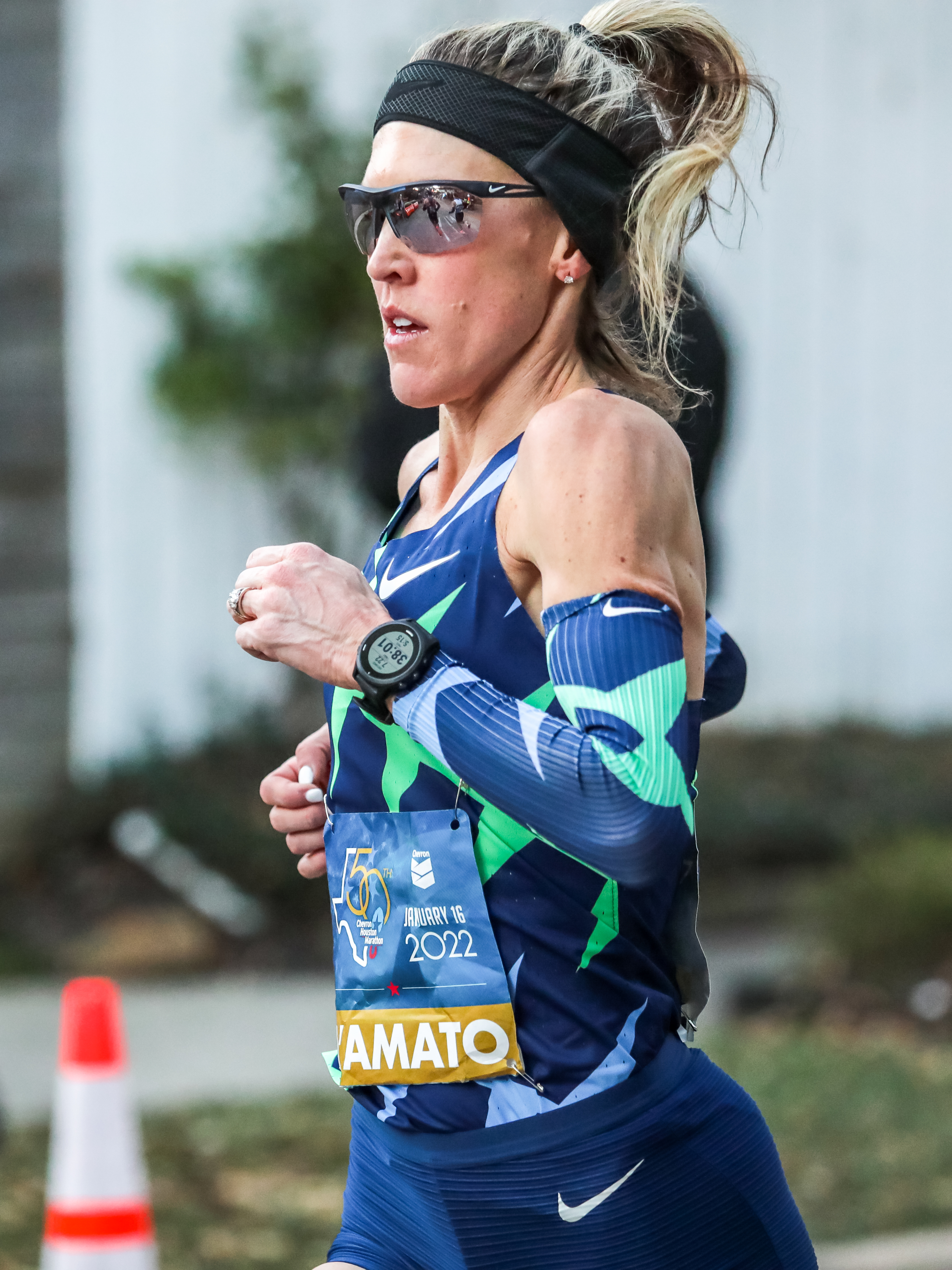 As a young soccer player D’Amato (then Carlstrom) joined her high school freshman cross country team on a whim, only to discover that running was her genuine love. She raced competitively at American University in Washington D.C. only to be sidelined by an injury she thought would end her competitive running.

D'Amato shared the one thing she is most proud of about herself in an interview on Jan. 20, and it is not the win. "This whole journey has been intimidating for me; it's scary. I didn't quite know the path that I was on the whole time, but I'm really proud of myself that I had the courage to start," D'Amato said.

Because of her family, friends and community's love and support, she persevered even when she felt "out of place" on a path full of ups and downs. The ups, according to D'Amato, were simple, but she refused to allow the downs to drag her under.

"Stuff would go wrong, and I would write it off quickly," she said.

D'Amato persuaded herself that these would be speed bumps in her rearview mirror. Going through hardships and disappointments, she said, is challenging because one can feel alone and believe that things will always be this way. "You just have to keep your head down and believe that the best is yet to come," she said.

D'Amato remembers her most difficult running challenge. Her fitness had improved quickly as she aimed to compete in the United States Track and Field Olympic Trials in 2021. Then a hamstring issue threw everything into disarray, derailing the trial. "There is no way you are going to make it to the finish line if you do not make it to the starting line," she observed. Her dream vanished.

D'Amato has been going to physical therapy twice a week since then. "And I'm doing exercises almost every day to help create strength and balance. Getting old isn't easy … but the 2024 Olympics are still top of my mind," she said. D'Amato will be 39 years old when the next Olympics take place.

One of the things that provides her the most encouragement and allows her to take risks is the support of her family, husband Anthony, and their two children, Tommy, 7, and Quinn, 5. It makes no difference to them whether D'Amato is first or last. "They are still going to love me."

D'Amato admitted that running is a selfish sport because it takes a long time to train at her level. Sometimes she runs early in the morning before the children get to school. Other times, it is while they are at school, and on given weekends, she needs to hire a babysitter because her husband is in the Air National Guard.

"Our family had to get creative with how to make it all fit," she said.

Throughout her recent record-breaking marathon run, she feared the win would not happen for her that day. The winds were blowing at 10 to 14 mph, making the temperature feel like it was in the twenties. But she convinced herself that she had to continue to push until she was absolutely broke.

"Go a little further, further," D'Amato told herself. She asked inwardly why this is not feeling easy, only to respond, "You're trying to go where no American woman has ever gone before. This isn't going to feel easy," she recalled saying to herself.

The mental discussions D'Amato had with herself during the marathon pushed her that day — she was going to do it to make "herself proud." Running had given her the confidence and goal-setting abilities she needed to achieve. D'Amato said that she had worked hard on how she speaks to herself, especially when things are not going her way and that encouraging inner conversation made a difference.

"I know what it feels like to fail, and I know what it feels like to succeed. In a marathon, everything is hurting. You are exhausted; you can barely breathe; your legs are pounding, and you start feeling sorry for yourself. Your brain tries to convince you just to slow down. … I've been to that point and felt disappointed after the race. Oh man, there was more in the tank," D'Amato said.

"That happened in this race; everything was starting to shut down. I just didn't want to come up short. Whatever I needed to push through to get there, I was willing to do," she said.

Being kind to herself, being her own cheerleader, and ending up feeling proud is the message that D'Amato gives to the sport that has given her so much. She speaks in various settings and is passionate about helping others discover their passion for running from an early age.