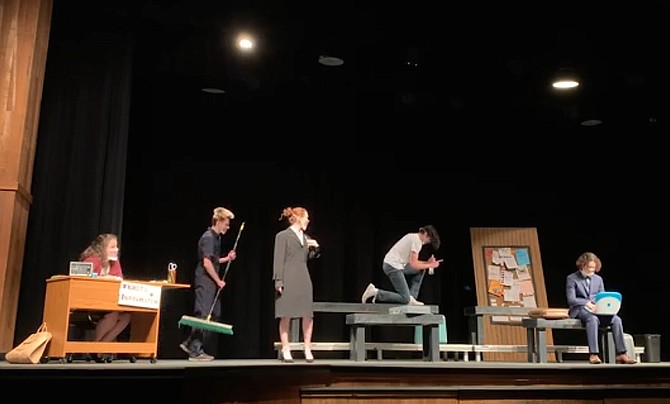 New Year's Eve, 1999. Everyone on the verge of a new millennium running to escape their past lives in boring towns for a chance of reinvention all lead to one place, a train station. D. M. Larson's “Waiting on Trains,” performed by James Madison High School, was a humorous one-act filled with irony about what the important things really are in life and unexpected interactions.

Relationships between strangers are arguably one of the most fascinating occurrences to be observed in everyday life. “Waiting on Trains” extensively explores the many results of relationships that can occur when a group of five assorted strangers are thrown together by fate while some are waiting for a train to escape the boring reality of a small town.

Within the total comedy of the show, the main source of bickering came from the polar opposite duo of Verna (Stella Monner) and Sue (Elenora Fiel). Sue, a businesswoman hungry to fulfill her biggest aspirations, and Verna, a ticketing woman whose boredom with her place in life has caused her to develop a carefree attitude, clashed with their differing perspectives. Fiel portrayed Sue in a posh and highly expressive manner where she always got her opinion out, which tag teamed well with Monner's portrayal of Verna's easygoing and sarcastic persona.

Throughout the entire production, several characters remained continuously on stage while others travelled on and off stage. Those in the eye of the camera for almost its entirety, including Ashton Rauch as Kirk and Stella Monner as Verna, never faltered from their character, creating deep identities. William Bush as Jean, a janitor, and Benjamin Eggleston as Rut, a homeless man, paired well in their roles that appeared at the most comedic moments. Even with less stage time than others, they created lasting impressions as onlookers who were connected to the train customers through Verna's interactions.

With requirements that had to be met from the VHSL one-act competition, the tech elements were simplistic and consistent. Although these requirements presented challenges, the cast and crew dealt with them gracefully. Soft lighting and the choice of a wide angle encompassing the entire stage made sure all actors were visible and facial expressions were able to be clearly read. Actors projected and articulated their lines without strain and with an abundance of energy that was infectious. However, those were not the only challenges overcome in this production due to pandemic regulations. An impressive triumph, the cast's distancing in the show's blocking never hindered their ability to tell the story, and only enhanced the environment of tension that comes with being strangers at a train station.

Talissa Uman, a senior at James Madison High School, took the lead in this production as the director. She was innovative in her direction of the actors and crew to create a cohesive and laugh pulling production. Uman will be studying Theatre Education in college, and this show certainly showcased her qualifications and dedication to the craft. Her work alongside stage manager Susan Weinhardt contributed to the final product of a smooth and engaging show.

Finally getting on that train they came for, the cast of James Madison High School's “Waiting on Trains” concluded their production with a memorable exit into the audience, signifying the characters’ finally being able to move towards their new lives.