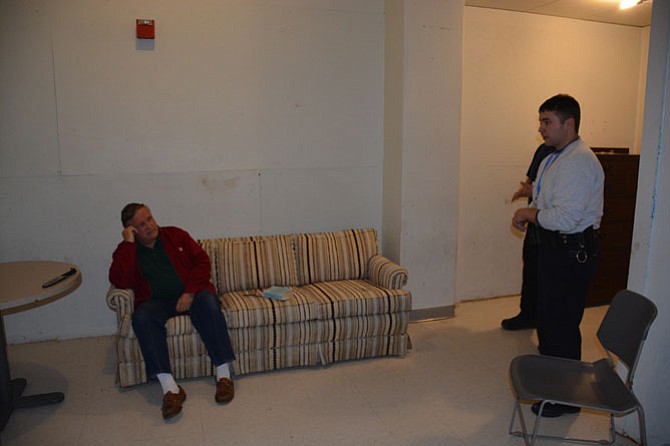 Officers (right) enter a fake residence to talk with a man role-playing as an emotionally disturbed person who was reported in the scenario to be suicidal. Photo by Tim Peterson. 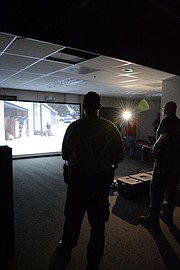 Officers ended up deciding to deploy pepper spray in a virtual scenario where a man posed a threat to himself and others by wielding a chainsaw.

“I was very impressed at the speed at which we’ve been able to implement a culture change.”

--Board of Supervisors Chairman Sharon Bulova

Making decisions can be instinctual, from the gut. It can also be practical and informed, coming to the best judgement considering all variables. For police officers responding to calls where there might be a threat of violence to civilians and or themselves, their decision whether to use force and which type to neutralize the situation quickly must be a hybrid.

In Fairfax County, Police Chief Edwin C. Roessler, Jr. has begun implementing a policy change in use of force decision-making that mandates officers “use time as leverage” and attempt to slow their reaction to a situation in order to engage a supervisor and better consider the subjects with whom they’re dealing.

A recent example Roessler gave is the March 2 barricade incident where 19-year-old Sayed Robbie Javid of Alexandria came out of his home carrying what police said appeared to be pistol but was later found to be a starter revolver. After he initially refused commands to surrender, officers used “less-lethal force” including firing a 40mm rubber bullet and bean bag shotgun, as well as the K9 unit to apprehend him.

“Deployment of deadly force would’ve been legal three times in my opinion,” Roessler said at a media event held at the Fairfax County Criminal Justice Academy in Chantilly on March 29. But in this case, Roessler said officers successfully followed the new policy by calling in a supervisor, taking a deep breath, assessing the scene and slowing it down.

“Preserving the sanctity of human life” is the end goal, which he said the officers accomplished.

ROESSLER said this “re-engineered” concept for critical use of force decision-making has been in development since he took charge of the department in July 2013. He sought input from the Washington, D.C.-based policy organization Police Executive Research Forum, visited Police Scotland and worked with the vendor Polis Solutions to craft a plan for the Fairfax County force.

In June, 2015, PERF executive director Chuck Wexler presented the organization’s 71 recommendations at a meeting of the Fairfax County Ad Hoc Police Practices Review Commission, including changing critical decision-making policy. Many of PERF’s suggestions were folded into the 142 recommendations the commission would eventually make to the Board of Supervisors. Those were broken down into categories including use of force, communications and mental health.

“This is a department that wanted to get better,” Wexler said at the March 29 meeting. “They embraced the ideas, which are not risk-free.”

One reporter asked whether the new model that calls for more factors to be considered before taking forceful action, as well as bringing in a supervising officer, creates a safety concern for officers who otherwise might have been more decisive in less time.

“That’s not the reality here,” Roessler answered, saying that officers were involved in customizing the training program and that care was taken to ensure the new policy wouldn’t be unsafe.

Lieutenant Matt Owens of the Sully District station said he and other officers have been coming into the new training with open minds and “don’t feel less safe at all.”

Board of Supervisors Chairman Sharon Bulova applauded the “dramatic and impressive” development in mindset and thought process of how officers respond to critical situations. “I was very impressed at the speed at which we’ve been able to implement a culture change,” she said.

Supervisor and Public Safety Committee Chair John Cook (R-Braddock) said that while the training is making the role of the police officer more complicated -- asking them to be social workers and sociologists, among others -- he’s excited for the county to be on the “cutting edge” of 21st-century policing.

“In Fairfax County,” he said, “we strive to be the best.”

Media observed two training modules for officers that were supposed to reflect the policy change. One was a room with a projection on the wall showing a potential scene officers might encounter in the field, such as a suspicious man walking around a suburban neighborhood or a bar fight.

THE OFFICERS were able to essentially interact with pre-recorded video clips to work through each scenario and decide whether or which type of force would be necessary, be it pepper spray, baton, taser or firearm. Practicing communication, before using force, with subjects in context was a key part of the exercise.

Afterward an instructor would review the crucial factors that led to the use of force decision, asking the officers to justify their actions.

The second module involved officers entering the home of a man who was potentially an “emotionally disturbed person.” In the scenario, the man’s sister had called police reporting that her brother was suicidal. Upon entering the home, officers saw that the man was sitting on a couch with a large knife close by on an end table.

Officers then practiced moving the knife away and talking the man through his options for evaluation and treatment at the Merrifield health center (or Fairfax-Falls Church Community Services Board).

Instructor Master Police Officer Peter Davila said the exercise was an extension of Crisis Intervention Team training. The goal, he said, is to “mitigate any potential for force, focus on communication, de-escalation and talk to the individual as a human being.”