Opinion: Commentary: Vote No on Question 1 in Virginia
Votes

Opinion: Commentary: Vote No on Question 1 in Virginia 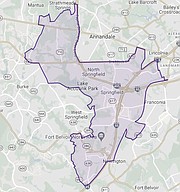 The rhetoric around Question 1 on the Virginia ballot is miles away from the actual redistricting process that would be frozen into constitutional language. Every pro statement I've read promises "the people not politicians will decide who represents them." In stark contrast, the proposed process makes meaningful citizen input virtually impossible.

Buried in the almost 1400 words of the full amendment are just 14 words about public input: "Commission shall hold at least three public hearings in different parts of the Commonwealth." Such a low bar of only three meetings is totally inadequate for Commission members to learn the on-the-ground reality of communities of interest across Virginia.

Even more constricting is the narrow window for this limited citizen input. On one hand, a detailed, seven-step process to name eight citizen members to the Commission consumes three months. In contrast, residents of the 95 counties and 38 independent cities that make-up Virginia are given, at best, 6 weeks to make their case about the impact on their communities of how they're carved up for the next decade.

Compact and contiguous are simply outward measures of what districts should look like. My district looks compact but it has parts of eight high schools, four supervisor districts, four state senate districts, and two congressional districts. Before the district was split into pieces, I loved the challenge of talking with high school students. Their questions were direct and demanding. I felt held accountable and I hoped their lasting lesson would be to expect straight answers from elected officials.

Now, I'm not the representative identified with any high school. Last year, even the League of Women Voters only included me in one of the four debates that covered voters in the 39th District. When communities are split, communication is cut. There's no focus. Voters can't hold their elected officials accountable if they don't know who represents them.

Because the ballot proposal prohibits any amendments to districts drawn by the Commission, the community knowledge of the 140 legislators elected by citizens of those communities is frozen out. There's no correcting what eight non-elected persons thought they heard in the limited public hearings by those who know the territory.

Moreover, the proposed amendment makes the Virginia Supreme Court the ultimate arbitrator, if the General Assembly rejects the Commission's plan. This would remove redistricting even further from the voters. Justices, who serve 12-year terms, were selected by whichever party was in control of the legislature at the time. At best, they represent a statewide voter preference of the past. At worse, this has played out to exclude significant demographic and regional experience. For example, despite encompassing 20 percent of Virginia's population, no one from Fairfax, Arlington, or Alexandria has been on the Virginia Supreme Court in two decades.

This lengthy proposed amendment contains extreme detail that allows for no flexibility in some provisions but raises serious legal questions about why such clear intent isn’t part of other provisions. The proposal reads, if the General Assembly doesn't accept the Commission's plan, "the districts shall be established by the Supreme Court of Virginia" – no detail – not a single basic protection.

Given the political reality of how Virginia justices are put on the bench, it is unacceptable to not, at least, require a bi-partisan approval of the special master(s) that courts elsewhere have used in gerrymandering cases. Even more troubling, the requirement for open meetings and public access to all records doesn’t cover the Court's work – only the Commission's work. Under the proposed amendment, the Virginia Supreme Court is free to operate totally out of public scrutiny and, by tradition, it will. Proponent claims of an open and transparent process are reduced to only promises.

I was joined by 48 members of the General Assembly in opposing this ballot question. Some have even greater concerns about the Virginia Supreme Court’s role. They fear political gamesmanship since it only takes two of the eight legislators on the Commission to kill a plan. Review by the 140-member General Assembly with the opportunity for public comment dies with it. Under the amendment, the Court alone would determine how people will be represented for the next decade.

However, the greatest concern is the total silence on the racial, ethnic, or geographic make-up of the Commission. The selection of the Commission members is controlled, again, by judges elected by the majority party in the previous decade. The proposed amendment contains no requirements these judges even consider – let alone achieve – a balance that is representative of Virginia's people.

The bottom line is that we don't need an amendment to the Virginia Constitution to proceed with redistricting that is open, inclusive and fair. Passing this deeply flawed proposal will only tie our hands now and in the future to a process controlled by procedures and by a timeline that makes public input little more than window dressing. Demand we do better. Vote No on Ballot Question 1.