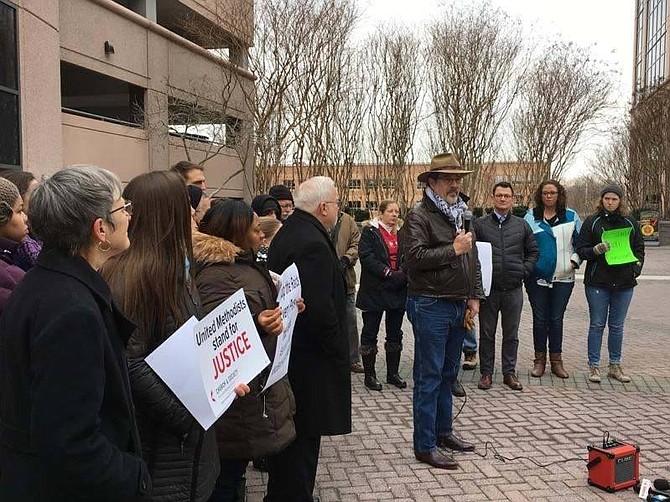 On Feb. 17, Rising Hope pastor Keary Kincannon and other religious leaders held a prayer vigil and demonstration at the ICE field office on Prosperity Avenue in Fairfax. Photo contributed

On the morning of Feb. 8, U.S. Immigration and Customs Enforcement (ICE) officers showed up across the street from Rising Hope Mission Church on Russell Road in the Mount Vernon area of Alexandria. According to several witnesses, men who had just left the church’s hypothermia shelter for the day were set upon and questioned.

Some were asked if they’d seen any number of illegal immigrant criminals for which the officers were searching. Others, Latinos in the group, were singled out, fingerprinted, and some even restrained, forced into vans and driven away, witnesses said.

An ICE official would only confirm that two arrests were made at that location on that day.

“Every day, as part of routine targeted enforcement operations, U.S. Immigration and Customs Enforcement (ICE) arrests criminal aliens and other individuals who are in violation of our nation’s immigration laws,” the official said in a statement.

But on Feb. 17, Kincannon and other religious leaders decided to pay a return visit to ICE, specifically at the field office on Prosperity Avenue in Fairfax. He said they have been trying to find out the names of the men who were allegedly picked up in the vans but haven’t been successful yet.

After reports of ICE officers conducting large surges of searches, “targeted enforcement actions,” for undocumented immigrant criminals that followed executive order from President Donald Trump, this action in Mount Vernon has sparked fear in the community and calls for answers from leaders, according to the religious leaders.

Gov. Terry McAuliffe released a letter Feb. 16 directed to John Kelly, secretary of Homeland Security, requesting an immediate briefing regarding the events outside Rising Hope, as chronicled by NBC Washington.

“These reports are anecdotal and I recognize that previous administrations have conducted immigration enforcement actions,” McAuliffe writes. “However, the NBC report raises a concern that, unlike previous actions, ICE agents are detaining Virginia residents without cause or specific allegations of criminal activity.”

“This is something we will not stand for,” Kincannon said at the vigil. “That’s our legal cause in why we are opposing what is happening. But there’s a moral cause as well, that goes to the heart of our faith.”

Kincannon said that Jesus Christ taught “how we treat the least of these" is how we treat him.

Oscar Ramirez, one of the green card-carrying men who said he was detained and questioned by ICE on Feb. 8 before eventually being released, said fear in the immigrant and Latino community has caused people to stay inside, away from public and government buildings.

Supervisor Jeff McKay (D-Lee) said this is a major blow to the public’s relationship with law enforcement — one that Fairfax County Police have been working to repair and bolster.

McKay said many people don’t differentiate among law enforcement — all are “police.” And if residents, undocumented or not, refuse to open the door or run the other way when FCPD comes around looking for help solving crimes, that’s a concern.

“We’ve come too far building relationships with the immigrant population,” McKay said, to “sever ties like this.”

McKay cited the recent murder case of 15-year-old Damaris Reyes Rivas, for which FCPD has arrested 10 suspects and issued murder charges against five of them.

“Without that cooperation, we wouldn’t have people under arrest,” McKay said.

FCPD Chief of Police Edwin Roessler said community involvement was definitely part of the case that helped them solve it.

Regarding the ICE activity as a threat to public trust of police, Roessler said “I absolutely have concern.”

He said he’s been hearing the same questions from numerous sources, “challenging me with what boils down to the perception, that we’re out there as immigration police.”

ICE is out there, Roessler said, but the myth that’s developed about FCPD “doing immigration raids in certain parts of the county, it’s not true.”

FCPD does not participate in ICE’s enforcement activity, the chief said. “I need the community to understand the FCPD primary mission is to prevent and fight crime. We’re not going to assist ICE in the service of an administrative matter.”

Two memos from the Department of Homeland Security were recently published giving more detail to the executive orders on immigration and deportation enforcement.

“To maximize participation by state and local jurisdictions in the enforcement of federal immigration law near the southern border,” director Kelly wrote, “I am directing the director of ICE and the commissioner of CBP to engage immediately with all willing and qualified law enforcement jurisdictions that meet all program requirements for the purpose of entering into agreements under 287(g) of the INA.”

Spokespeople from both ICE or DHS both declined to answer whether or when Fairfax County Police might be contacted about participating as the memo describes.

However, when asked about the memo, Roessler said first that any change in FCPD operation would need to go through the Board of Supervisors. He also said he had not been contacted by anyone from ICE or DHS regarding the memos.

Then he added: “Regardless of their status, we want people to have great confidence in their police department and trust. We protect and serve you, prevent crime. That’s the role we’ve been doing, and what we intend to do in the future.”